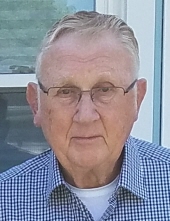 Dick was born June 16, 1940 in Galesburg, the son of Marvin Luther and Pauline Frances (Hoff) McCulloch.  He graduated from Galesburg High School in 1959.  After high school Dick worked for 2 years at Mountain States Telephone Company in Albuquerque, NM before returning to Galesburg.  After moving back to Galesburg, Dick went to work for Gates Rubber Co. as a maintenance mechanic.  His career spanned 41 years, retiring in 2003.  During this time, Dick went to India for Gates to help them open their new plant.  He enjoyed his different trips to India from 1997 to 2000.

Dick married Rosie Ann Pierce in Burlington, Iowa on April 26, 1960.  She survives, as do their two sons, Guy McCulloch of Bettendorf, IA and James McCulloch of Galesburg; and a half-sister, Annie Lindsey of Chicago.  He was preceded in death by an infant daughter, Phyllis; father, Marvin; mother and step-father, Pauline and Ernest Reed. Dick enjoyed being active in Civil Air Patrol with his sons when they were growing up.  Being a maintenance mechanic, Dick enjoyed working around the house, tinkering in the garage, fixing anything that needed repaired, and tending to his yard.

Cremation rites will be accorded.  Graveside services will be Friday, January 31, 2020 at 10:00 am at Oak Lawn Memorial Gardens, Galesburg.  No visitation is planned.  Arrangements have been entrusted to Watson Thomas Funeral Home and Crematory, Galesburg.  Memorials may be made in Dick’s memory to the Knox County Humane Society.