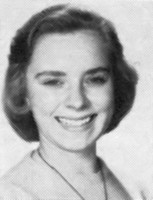 She was born April 15, 1941, in Galesburg, the daughter of Virgil and Dorothy Norris White.

She worked in retail and was a homemaker.

Funeral will be at 11 a.m. Wednesday in Hinchliff-Pearson- West Chapel, with the Rev Jeff Barclay officiating. Visitation will be from 7 to 8:30 p.m. Tuesday at the funeral home. Burial will be in Memorial Park Cemetery.

Memorials may be made to the Knox County Humane Society and to a charity of the donor's choice.