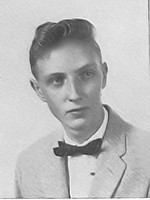 He was born January 23, 1942 in Jackson County, Illinois, the son of Amos E. and Lucevia Kimzey Qualls.

He was 1959 graduate of Galesburg Senior High School, and he served in the US Navy Reserve. He was sales manager for Achievement Industries for 12 years in Monmouth, IL.